Homebuyers who purchased in one of the Toronto region’s suburban communities last year have seen their property value, on average, rise by nearly twice as much as those who bought in the City of Toronto at the same time.

New home price data published by Properly this month found that buyers who purchased their home in the Toronto region’s suburbs during the six months that preceded the onset of the COVID-19 pandemic have seen their investment grow by an average of 30 percent. By comparison, buyers who purchased in Toronto-proper during the same period saw an average property value increase of 16 percent, just over half of the appreciation achieved by their suburban home counterparts.

Of the total 24 municipalities analyzed, Oshawa reported the highest level of value appreciation at 48 percent. In the six-month period prior to the pandemic, the median sold price of a home in the Durham Region city clocked in at $523,100. In April 2021, the value of an Oshawa home hit $763,659, according to Properly’s median Instant Estimate.

Following closely behind, both Brock in Durham Region and Georgina in York Region reported a home value appreciation of 46 percent. The median sold price of a home in Brock jumped from $453,876 in the six-month period to the Instant Estimate’s current value of $666,695 in April, while Georgina properties increased from $545,000 to the Instant Estimate’s current $783,144 value. 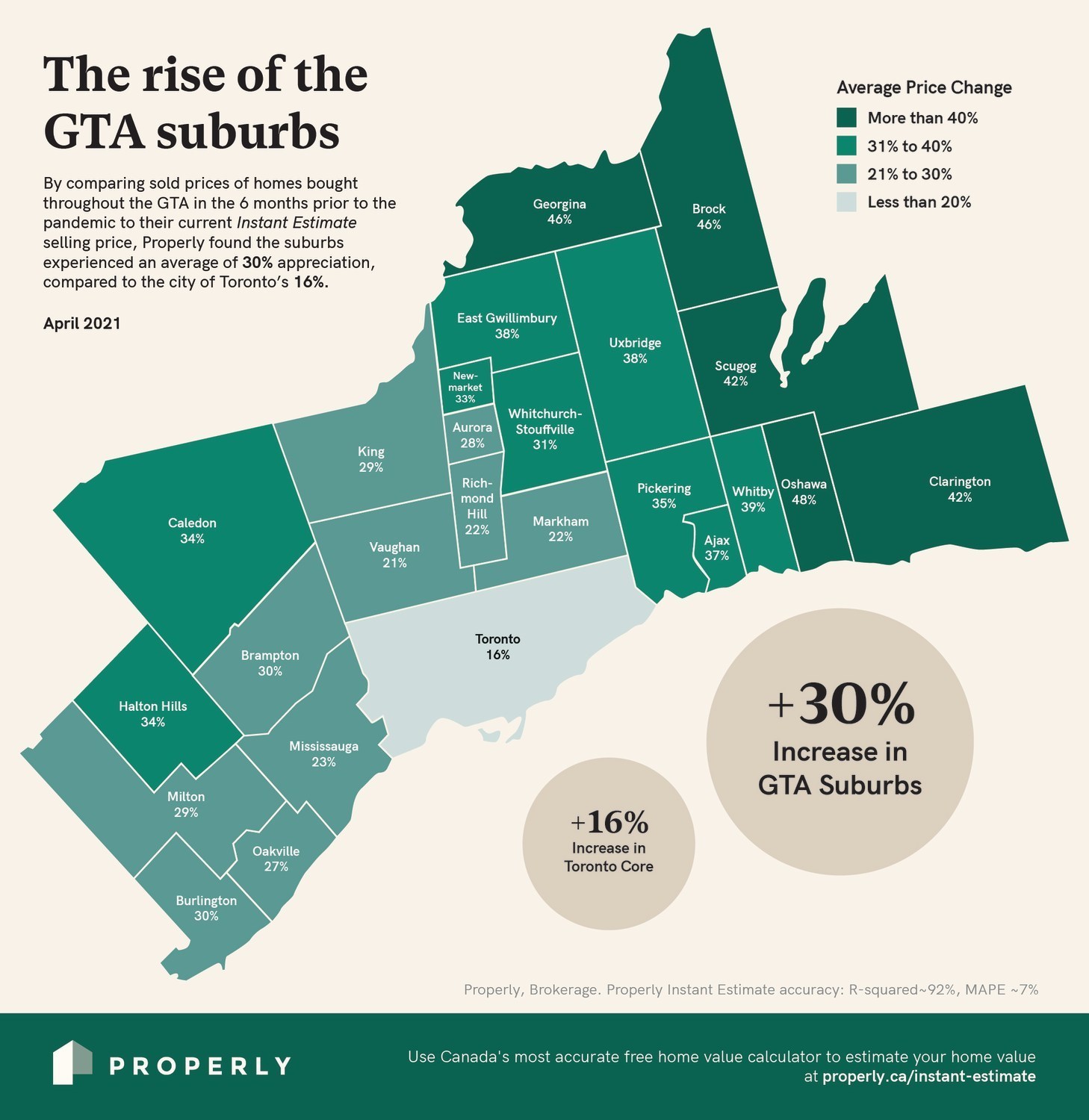 Vaughan homes experienced appreciation of 21 percent between the two time periods analyzed, while Richmond Hill and Markham both saw home values appreciate by 22 percent. Bordering the City of Toronto to the west, Mississauga and Brampton experienced home value appreciation of 23 percent and 30 percent, respectively. Along Toronto’s eastern perimeter, property values in Pickering appreciated by 35 percent.

Out of all the communities in the report, Toronto recorded the lowest property value appreciation at 16 percent. In the six-month pre-pandemic period, homes in the city sold at $748,000. The Instant Estimate now values Toronto homes at $875,389.

Properly notes that remote work and the desire to have more space is driving the relocation of many homeowners from Toronto to the suburbs.