Torontonians are looking to leave the big city

The onset of the COVID-19 pandemic in the spring of 2020 was the catalyst that pushed many urbanites to set their sights outside of Toronto when it came to house hunting.

Building off those findings, Livabl has identified the 10 most popular GTA communities that are receiving the most inquiries (RFIs) from BuzzBuzzHome users who are currently located in Toronto. With the help of BuzzBuzzHome’s data team, Livabl put together the top 10 communities that have received the most RFIs from Toronto-based users over a 90-day period beginning in late summer through to late fall 2020.

The Toronto-located RFIs that were sent to the top 10 GTA communities were collected between September 1st and December 1st in 2020. 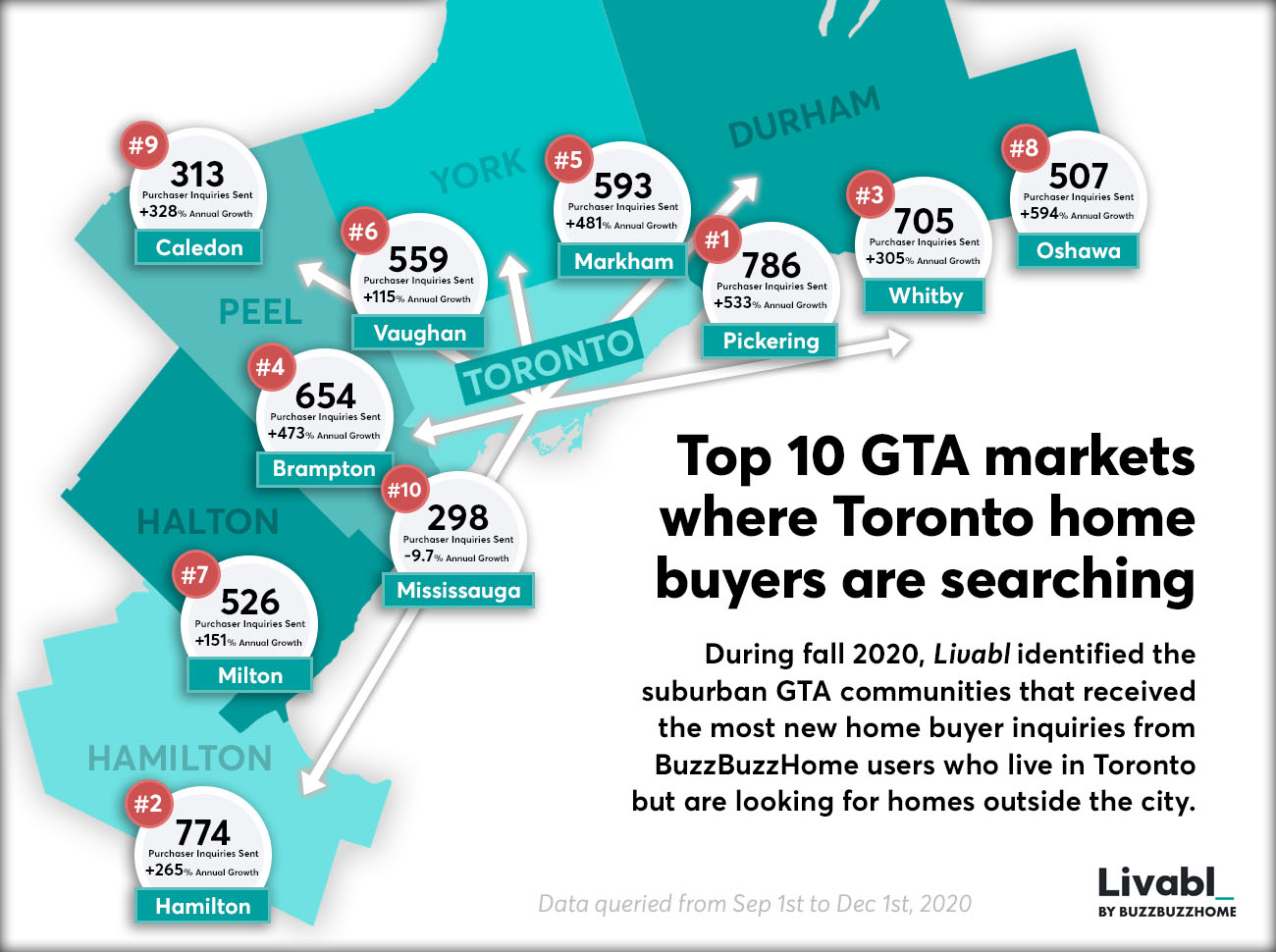 Pickering received the highest number of buyer inquiries from Toronto-based users over the 90-day period, with 786 inquiries sent to new home developments in the suburban city during that time period. The city also experienced the second-highest levels of annual inquiry growth, with the number of inquiries from Toronto buyers increasing by 533 percent from 2019 to 2020 over the same time frame.

Hamilton and Whitby followed closely behind, posting 774 and 705 inquiries, with year-over-year growth rates of 265 percent and 305 percent, respectively. While still ranking in the top 10 list, Mississauga received only 298 RFIs from Toronto users, outpaced by other smaller GTA cities and towns. Out of the 10 suburban communities on the list, Mississauga was the only community to report a decrease in annual inquiries from Toronto.

Although Oshawa ranked eighth on the list with 507 Toronto-based RFIs, the eastern-GTA community saw the highest levels of inquiry growth during the 90-day period, jumping by 594 percent annually.

From the top 10 communities analyzed, the majority of Toronto-based inquiries appeared to be sent to new construction projects located within Durham Region, which totaled 1,998 inquiries between Pickering, Whitby and Oshawa. Peel Region had the second-highest number of inquiries at 1,265 between Caledon, Brampton and Mississauga. York Region ranked third with 1,152 Toronto-based inquiries distributed between Markham and Vaughan.

Pickering, Oshawa and Brampton also were identified as three of the top 10 communities that experienced the largest increases in visitor inquiries for new developments between September and November of 2020 in previous reporting.

Real Estate Advice
Sponsored
Buyer Representation Agreements, and more real estate advice READ MORE...
Mortgage rates to start rising before end of 2021
Rock-bottom mortgage rates have been a major driver of red-hot home buying activity across Canada since the country emerged from the spring lockdown. READ MORE...
Detached home prices rose over 20% in every Toronto suburb
The supply on the market continues to be outmatched by demand and this misalignment is driving prices up significantly across the entire region. READ MORE...