While last year’s housing market took its time getting off the ground, 2020 could tell a different story.

Hopeful buyers are continuing to step back into the real estate ring after a period of adjustment against the federal government’s mortgage stress test, which was introduced in 2018.

In a Royal LePage House Price Survey released today, aggregate home prices across Canada were reported to have increased by 2.2 percent year-over-year for Q4 2019, up to $648,544, as more buyers proceeded to move out of the wings.

In what was considered one of the biggest national housing market corrections since the 2008 Great Recession, the mortgage stress test left many would-be buyers in limbo. Some waited to gauge its impact while others were pushed out of the real estate market momentarily.

“For the most part, buyers have adjusted, yet it still represents a significant hurdle as families pursue the dream of owning their own home,” wrote Phil Soper, president and CEO of Royal LePage, in the report.

After a sharp dip in sales in the early phases of 2019, things finally turned a corner in the third and fourth quarter as interest rates remained low and labour markets strengthened across major cities.

“While the drop in the number of properties bought and sold during the 2018-19 downturn was large, the value of homes in Canada held up remarkably well, with only minor, single-digit declines in the areas of Ontario and B.C. that had experienced the most aggressive price inflation in recent years, and of course those regions still suffering from a downturn in the oil and gas sector,” stated Soper.

If demand continues to trump supply in some cities, the spring market could also be a lively one.

Thanks to low supply and population growth, home prices continue to trend upwards in the Greater Toronto Area. While price growth was varied across the region, the aggregate price of a home increased to $843,609, a 4.8 percent boost year-over-year. Condominiums are the fastest appreciating housing type across Canada, particularly in this area, where median condominium prices jumped by 7.8 percent year-over-year to $565,919. By comparison, two-storey homes increased by 4.4 percent to $982,944, and bungalow prices hiked upwards by 2.4 percent to a median price of $806,977. 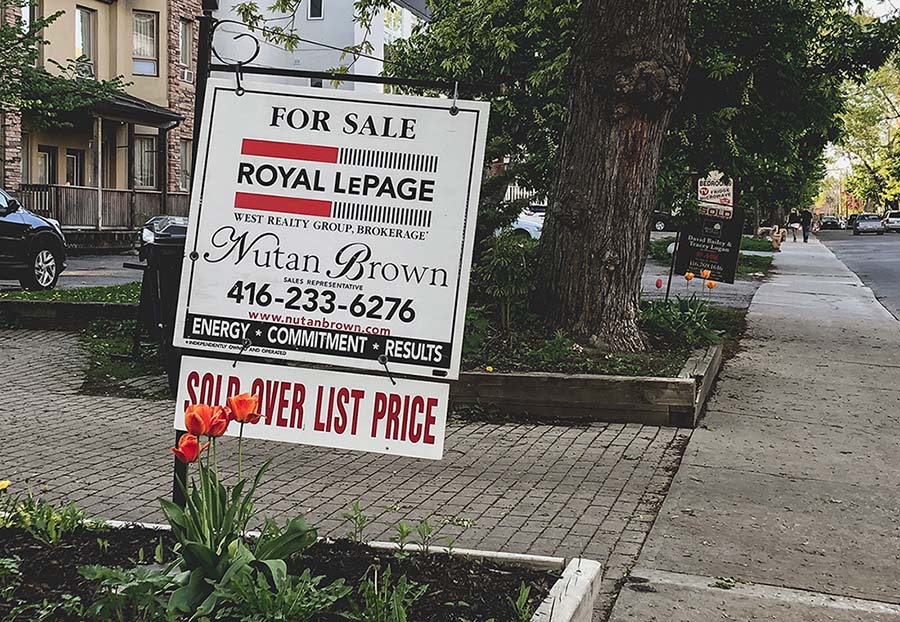 Similarly, low inventory and a smaller rental market in Ottawa is driving up prices there. Bungalows were a hot-ticket item in Q4, with median prices spiking 10.1 percent year-over-year to $501,195.

An active spring market is predicted for Montreal too, which just saw its strongest appreciation rate in a decade — the aggregate home price reached $433,993, up 6.3 percent year-over-year.

“We are currently in a ‘perfect storm’ for an exceptionally competitive spring market: interest rates are low; employment rates are healthy; listing inventory is limited; and, all buyer segments are active, including first-time buyers, baby boomers, newcomers and foreign buyers,” stated Dominic St-Pierre in the report, the vice president and general manager of Royal LePage in the Quebec region.

Vancouver was one of the hardest hit regions when the stress test took effect, with sales showing downward momentum. The Greater Vancouver Area still showed a year-over-year descent in Q4 2019, with the aggregate price of a home dropping by 4.8 percent to $1,107,719. Though, in the previous quarter, aggregate prices declined by 5.2 percent, which tells us that the market could be heading into recovery as sales volume inclines and inventory decreases.

“We’re likely to see some moderate price growth after last year’s decline in prices,” wrote Randy Ryalls, general manager of Royal LePage Sterling Realty. “The window of opportunity for buyers to get a deal is closing quickly for most typical buyers. There remain some excellent opportunities in the luxury market.”

Real Estate Advice
Sponsored
Purchasing a new home during a divorce, why are some deposits bigger, and more real estate advice READ MORE...
Demand for luxury homes surging even during pandemic
Homebuyers have returned to markets across Canada in droves during the post-lockdown period, even within the luxury housing sector. READ MORE...
Are parents taking a down payment risk as divorces soar?
Like any major financial outlay, there are risks when helping to make a down payment for your child and in-law. READ MORE...